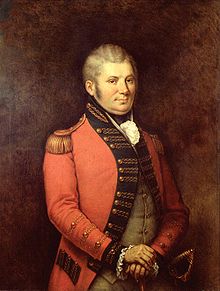 On July 8th 1792, John Graves Simcoe came to the steps of the newly built, but yet unopened, wooden church of St. George’s. It was situated in the woods just to the west of Market Square, some distance from Fort Frontenac, the centre of activity of the new town. This land was still legally part of New France, but that was about to end, and a new era in Canada, Ontario and Kingston’s history was to start. With due solemnity, but perhaps not realizing the far reaching consequences of what was happening, John Graves Simcoe took his oath to be the first Lieutenant Governor of the newly created Province of Upper Canada, one of the two Provinces of Canada Colony. British Common Law replaced the French code civil. An appointed Executive Council and Legislative Council, and an elected Legislative Assembly came into existence. The latter two would meet first in Newark in September. The Executive Council met the next day in Kingston.

The wooden church replaced a meeting room in Fort Frontenac which had been shared by all denominations for services. Now they would share the new church until first the Roman Catholics and then the Presbyterians had enough members to build their own churches in the rapidly expanding town.

225 years later, on Saturday July 1st 2017, at 1 p.m., Simcoe’s oath taking will be re-enacted on the steps of the stone church which replaced the wooden church 190 years ago. All are welcome to attend the re-enactment of that momentous day in Ontario and Canada’s history.