This was certainly a day for the discovery of a hidden little Kingston gem. The Scouts Museum is the smallest of Kingston’s roughly 37 museums and tucked away on the north end of MacDonnell Street (they are looking for a location that is more accessible….). It is open by appointment only as of now – but the people in charge – Bill Lewis and Stephen Reid- will be more than happy to accommodate your schedule to show their treasure!

For this visit, a group of people volunteering for the Kingston Association of Museums got together to learn about the history of scouting in Kingston.

The museum was started as a centennial project for the 100th anniversary of Scouting in Canada. Members from the 35th Baden Powell Guild were the core of the museum founders and the Guild provided the seed money for them to start up. Long time Scouter and Guild member Robert (Bob) Hinch had recently passed away at that time. He had always had a vision of a museum to maintain the area’s Scouting heritage and so the museum was originally  an unofficial tribute to him as well as other local Scouters who had “Gone Home”. The Guild is an organization for people who are past or in some cases present members of Scouting and Guiding who no longer work with active groups but wish to maintain their connection with Scouting and Guiding.

The scouting movement was founded in England in 1907 by Robert Baden-Powell, then a lieutenant-general in the British army. Scouting came to Canada in early 1908 with three troops established almost simultaneously in Merrickville and St Catharines ON and Port Morien, NS, and in 1912 the Boy Scout Association was granted a royal charter throughout the Commonwealth by King George V. The Canadian General Council of the Boy Scout Association, incorporated 12 June 1914, was a branch of the Boy Scout Association until 30 October 1946 when it became an independent member of the Boy Scout World Conference. The name was changed to Boy Scouts of Canada and to Scouts Canada in 1976. Every governor general since Earl Grey in 1910 has been “Chief Scout.” (Source: Canadian Encyclopedia)

Bill Lewis and Stephen Reid are both long time Scouters with a history going back to participating as boys, becoming leaders and now keeping this history alive. In our group of volunteers, a wonderful connection was made. It turned out that we had a former scout and scout leader among us, who was even featured in one of the posters dating back to the 1990s with his son. He, Bill and Stephen are now on a quest to identify and locate the other people in the photo. There are many historic photos in this museum where leaders and scouts still need to be identified, so we can learn more about them. 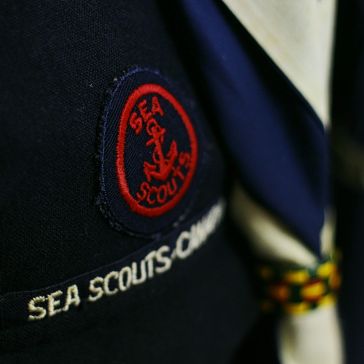 We all enjoyed the interesting background that Stephen had come alive for us. We all took our time checking out the uniforms of various periods that are on display as well as massive amounts of badges! We learned about how the Canadian Scouts in Kingston  have close ties with the Scouts in New York State and oftentimes organize jamborees together. With events like the World Jamboree, the Scouts are a truly international organization that brings youth of all nations together. 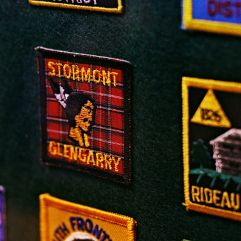 The Scouts Museum has recently put together a Facebook page – a good way to keep up with them.  If you are interested in Scouting today, have a look at the Scouts Canada webpage.

The Scouts Museum will be at the Kingston Regional Heritage Fair on May 10 held at McArthur College.

One thought on “Discovering The Scouts Museum”