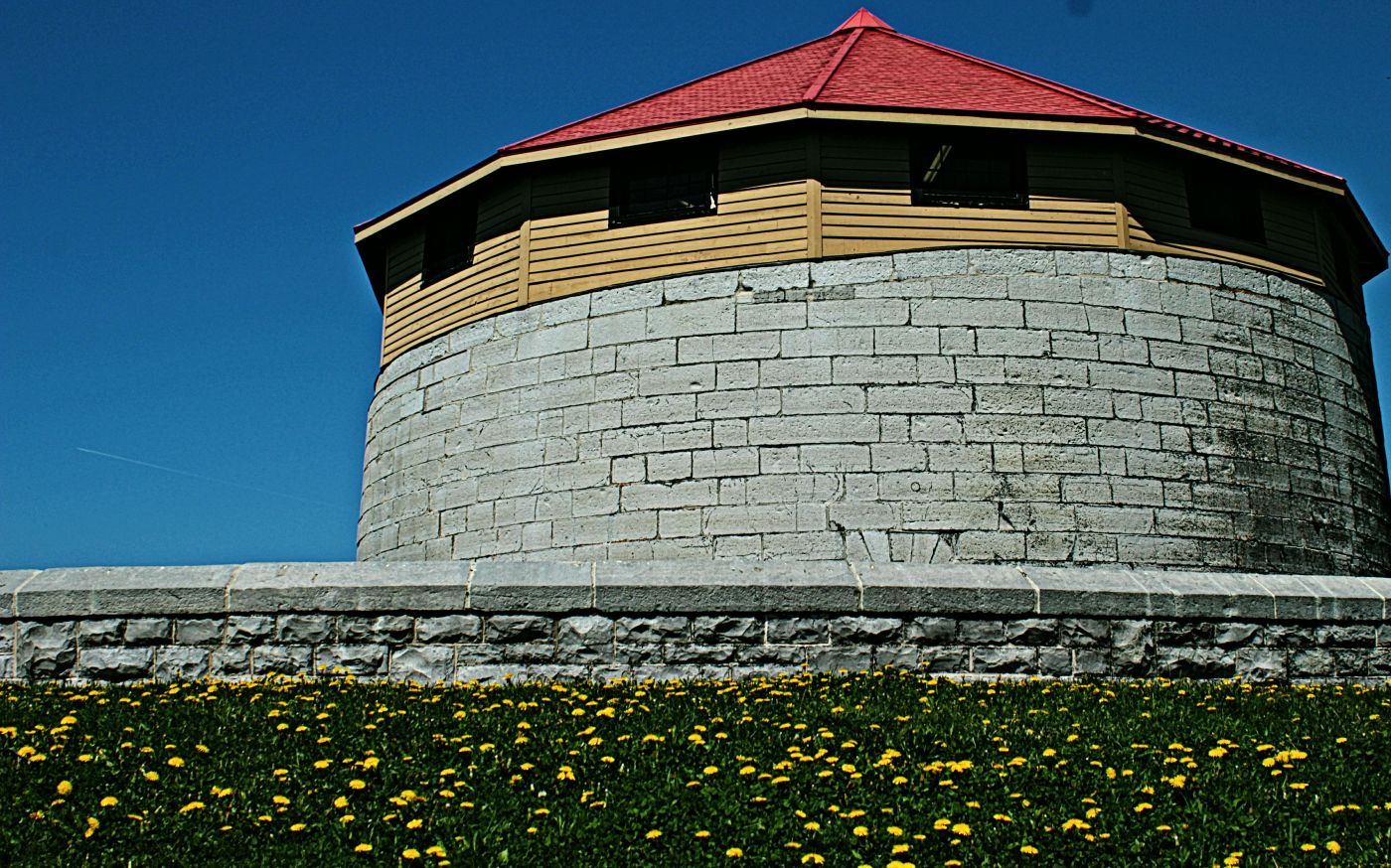 It was a great privilege to spend a couple of hours on a warm and sunny spring morning with the Curator of the Murney Tower, Danielle. It was a good thing she had given me a heads up to bring a sweater – it stays quite cool on the inside of these limestone walls. They are up to almost 4.5m (15 ft) thick on the side facing the water!

There are four Martello Towers in Kingston, the Murney Tower is one of them. The others are Shoal Tower in Confederation Basin, Cathcart Tower on Cedar Island and Ft. Frederick at RMC.

The Murney Tower was erected in 1846 but fortunately it never saw battle. In the 1840s tensions were arising between Britain and the US over the occupation of the Oregon territory. This territory extended from the 42nd parallel to just north of the 54th parallel. James K. Polk ran for election with the slogan ’54 40 or Fight!’ It was his election that made Britain take the American threat seriously and begin planning the fortification of Kingston. Though Kingston is nowhere near the disputed territory, it is an important transportation hub. Neither side really wanted a war. Britain agreed to give over everything south of the 49th parallel and Polk decided not to bother fighting to get the “comparatively worthless territory north of the 49th.” They decided to extend the boundary, which was already at the 49th parallel, westward. The Oregon Treaty was signed in June 1846, just as the Murney Tower was completed. It took only 5 months to be built, as opposed to the regular 9 months for a similar construction at the time.

My visit to the tower fell on a quiet weekday morning, early in Kingston’s tourist season. I had plenty of time to explore the three floors – the tower is really a large space to discover. The first line of defense of course is the top floor, equipped with a Blomefield cannon. The cannon’s range is approximately 2000m – about halfway to Wolfe Island. It shoots 32 pound cannon balls that get fired as ‘Hot Shots’ – heated in the ‘Hot Shot Oven’ placed next to the cannon. The cannon’s goal was not only to sink enemy vessels by tearing holes into the hull – the hot shots would be aimed at the gun powder storage and causing an explosion on board. As history overtook the building of this tower, it was only armed 15 years after completion. By then Martello towers were obsolete as weapons technology and ship design had been improved beyond their usefulness.

Martello towers in other British colonies were not usually equipped with roofs – Canadian climate made them a necessity though. The original structure was a tin roof that could have been disassembled if there had been a real chance for conflict in order to safely operate the cannon. The present roof dates from the 1970s and is not removable for safety reasons.

The main floor floor of Murney Tower is what used to be the living quarters, designated as barracks. The tower was occupied from 1848 until 1885. It could house a maximum of 24 soldiers and one officer or multiple soldiers and their families. 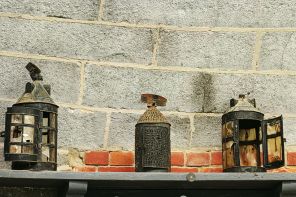 I could imagine the fully inhabited tower would be quite cramped quarters with no privacy to speak of. Cooking, eating, sleeping all took place in the same space. With the stove being the main source of heat, winters must have been challenging to say the least. The Royal Canadian Rifle Regiment assigned to Murney Tower was created in 1840 and lasted until 1870. This was a special regiment that was created due to the serious problem of desertion. Men were enlisting in the army in Britain and then, after receiving their free passage to Canada, would leave for the United States and not be heard from again. The RCRR were supposed to keep look out for such deserters. The men chosen for this regiment were often older and had already proved their loyalty to the British military. More of them were also allowed to have wives and children “living on the strength” as it was thought that men with a family would be less likely to desert.

The main floor also served as a second line of defence. The carronades here can shoot 400 meters and were meant to defend against a land attack.

Then there is still the lower level to explore. This served as the last line of defense. There are four capponieres around the base of the tower. Each is ringed with the 11 rifle loopholes to protect the dry ditch. Soldiers would shoot out these rifle holes at any attacking soldiers. It is hard to aim out of these small windows, but the bullets would ricochet off the limestone walls outside until they hit something. Also, there are no blind spots in the dry ditch.

The lower level also features the gunpowder magazine and various store rooms. A lot of planning went into the design of the gunpowder storage. The room is designed with many safety features, as the magazine held enough gun powder to seriously damage, if not destroy, the tower. Gunpowder loses its explosive property if damp. Limestone is a porous sedimentary rock and can absorb water. Since the walls are so thick, they remain cool during the summer, but on a humid day, water often condenses on the walls and “sweats” off the limestone. The brick arch, which is fired and therefore impervious, protects the gunpowder from any drippings. The gap between the limestone and brick is so that water could either run off or evaporate off of the brick. Gunpowder is volatile, and can explode if it becomes too dry. Ventilation shafts keep the air moving. Open flames were never brought into the magazine. Boots were removed before entering the magazine. Metal additions to the bottom of the boots could create a spark. The nails of the floorboards were made of wood, not metal, to prevent any sparking. The door is covered in copper, to make it stronger in case there was firing taking place in the basement. However, since copper is conductive, it was painted in three coats of black paint.

Personally, I think a visit to Murney Tower is a ‘Must’ if you are visiting Kingston, especially if it is a short stay. It gives you much insight into local history and is a condensed, neat experience without having to spend hours – lots more interesting details to be learned during a tour of the tower! Having lived in Kingston for 8 years now I can’t believe I came to discover this enthralling piece of history only now. We will certainly be back with friends & family over the summer. A great place to cool off on a muggy, hot Ontario summer day, too!