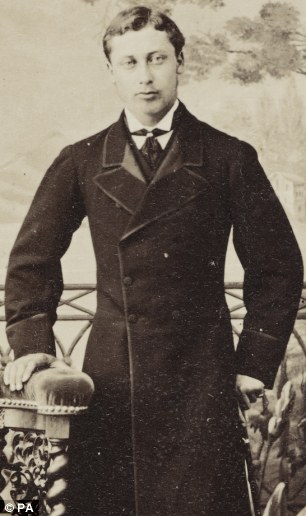 Had there been Twitter in the summer of 1860, tweets in Kingston would have been about the upcoming visit of Queen Victoria’s son, the 18-year-old Prince of Wales, who later became King Edward VII. Kingston was one of several planned stops on the Prince’s tour of Canada and the United States. He and his entourage would arrive in Kingston on a steamer, which happened to be called the Kingston, and they would be housed at two very fine homes: Mortonwood and Alwington House.

The steamer carrying the Prince of Wales arrived in Kingston on September 4, 1860 and moored in the harbour as thousands of Kingstonians stood waiting to welcome the Prince. Those who had prepared the accommodations would have been particularly excited about the Prince’s arrival for they had re-furnished the residences. The new, elegant furniture had been built by talented inmates at the Kingston Penitentiary. One of the chairs that was made for the Prince’s visit is on display at Canada’s Penitentiary Museum in Kingston.

The most remarkable thing about the Royal visit is that the Prince never set foot in Kingston. He never saw the attractive furniture that the craftsmen at Kingston Penitentiary built. The story of the last-minute change of plans is rooted in religious and political issues.

Protestants in Kingston were enthusiastic about the planned visit of the young Protestant Prince. Members of the Orange Order, a religious and political fraternal organization, set plans in motion to welcome the Prince: thousands would march in the city’s welcoming procession and 12 welcoming arches would be built, decorated with Orange slogans, symbols and the names of Orange martyrs.

Catholics were outraged when they learned that the planning committee had agreed to allow the Orangemen to march in the procession. Vicar General Angus Macdonnell presided over a meeting at Regiopolis College that drew 1000 Catholics.[2] The view of participants was that the Orangemen’s stance was a form of aggression and they committed themselves to opposing the Orangemen’s plans by all legitimate means. The Catholics wrote to the Duke of Newcastle, who was in charge of the Royal Visit, to complain about the Orangemen’s political showmanship.

In response, the Duke of Newcastle signalled clearly that the elaborate processions and displays of the Orange lodges would not be appropriate. City officials attempted to convince the Orangemen not to continue with their grand plans. However, on Tuesday September 4, 1860, thousands of Orangemen from 54 lodges gathered at Market Battery to greet the Prince as he arrived at the wharf in his steamer, the Kingston.[3] They wore their orange colours and carried banners.

The Duke of Newcastle, seeing this blatant display from the steamer, decided that the Kingston would not dock in Kingston. While the ship was anchored in the harbour, Kingston’s mayor went aboard to speak with the Duke, hoping to persuade the Prince to come ashore for the festivities and the planned overnight stay, but his overture was unsuccessful. A letter penned by the Duke explained the Prince’s position by stating that the Crown rules over millions of Christians of every form and it would be inappropriate to acknowledge the symbols of one religious and political association, knowing that they were offensive to members of another creed.[4]

On the afternoon of the second day, the steamer left Kingston and headed for its next planned stop, Belleville. That stop was also cancelled because of the Orangemen’s activities. The Prince could not afford to spark problems like those occurring in Ireland. His tour continued to the west, stopping at many towns and cities including Cobourg, London, Collingwood, Toronto and Niagara Falls. In Kingston, the new furniture produced by the prisoners was sent to auction.

If you’d like to see one of the chairs that was made for the Prince’s planned visit, you’ll be able to see it on the second floor of Canada’s Penitentiary Museum once the museum re-opens. Because of COVID -19, the museum is currently closed. Many more details about the Royal visit (or the non-visit in Kingston’s case) and the extensive political issues can be found in Ian Walter Radforth’s book, Royal Spectacle: The 1860 Visit of the Prince of Wales to Canada and the United States.

[1] Royal Spectacle: The 1860 Visit of the Prince of Wales to Canada and the United States by Ian Walter Radforth, University of Toronto Press, 2004. page 165.

One thought on “The Penitentiary and the Prince”