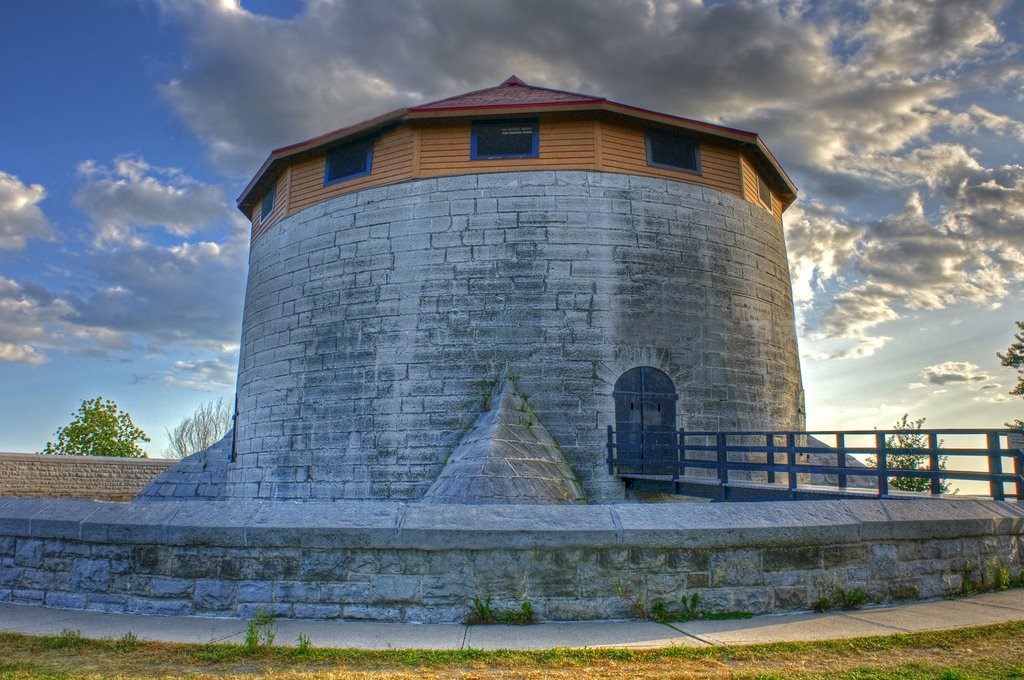 When I visited the Murney Tower before the COVID-19 pandemic, I was only vaguely aware of its Mediterranean connection. Recently, I’ve looked into the details. It’s tied to the Republic of Genoa, which was a maritime republic from the 11th century to the late 18th century, based in what is now the northwestern coast of Italy. Throughout its history, this republic established colonies in the Mediterranean and the Black Sea, including Corsica, Monaco, Southern Crimea and the islands of Lesbos and Chios. In order to protect its empire from pirates, it built strong, round forts like those you see dotted along Kingston’s waterfront.

One of the Genoese forts was the Tora di Mortella on the island of Corsica, built between 1563 and 1565. Later, this and other towers provided defence against foreign armies. In 1794, this fort survived a naval attack from the British, but it was taken by land a few days later after some fierce fighting. The British were so impressed by the design that they replicated it throughout the British empire during the next century. You will find these towers in Jamaica, Sierra Leone, South Africa, Ireland, Australia, among other places. They all became known as Martello towers.

Since Kingston was a strategic, maritime location for the British, it is not surprising that four Martello towers were constructed here. They were built in the 1840s to defend Kingston against attacking ships in the event of a war with the United States. The British knew that the round structure and thick walls made the fort resistant to cannon fire. An additional asset was the gun platform at the top, housing cannons that could be pointed in different directions. In other countries, the towers did not have roofs, but because of Canada’s cold and snowy winters, all nine Canadian Martello towers had removable roofs.

Murney Tower is the most westerly of the four towers built in Kingston. It’s located at the intersection of King and Barrie Streets. Heading east, the next one is the Shoal Tower in front of City Hall, then Fort Frederick at the Royal Military College and finally Cathcart Tower on Cedar Island. If you’re interested in the construction of the tower on Cedar Island, please see the blog Two bays, two stories. Two of Kingston’s Martello towers have been made into museums. While Fort Frederick is currently closed due to restoration work, Murney Tower is now open for pre-booked visits on weekends.

On my last visit to the Murney Tower I took four children from two Syrian families who were new to Kington. On every floor there was something that caught their attention: the cannon on rails at the top, the dress-up station on the middle floor and the stone passageways on the lower level. The dress-up station has a variety of clothes for children to try on: soldiers’ uniforms, girl’s dresses and lady’s bonnets. As well as being fun, this is educational because it quickly becomes clear that women and children lived in the tower. A baby was even born within the walls of the fort.

Just the sight of the fort brings pleasure to young and old alike. Who can’t like a dry ditch and a drawbridge? What child can’t resist running up and down the hill around the fort? The idea that this little museum has been a joy to Kingstonians and tourists over the years was the inspiration for Murney Tower’s online photo project earlier this year. People were encouraged to submit photos of family and friends at the Tower during any time period. The curator and manager, Simge Erdogan-O’Connor, will tell you that the response was wonderful. She told me about one photo from the 1960s showing a musical group, Growing Pains, performing at the top of the hill. It was submitted by Paul Campbell. The oldest photo dates to 1931. It was submitted by Isabel Wallace Gordon, who was a little girl when the photo was taken.

Besides visiting the museum itself, you can sign up for one of Murney Tower’s online information sessions. In the Curator and Collection monthly Zoom series, Erdogan-O’Connor shares her enthusiasm and knowledge about 19th century life in Kingston. Each month is centred on a different artifact from the museum’s collection. Details about this free program are available on Facebook.

I’m excited about the re-opening of the museum and will bring friends to see this charming piece of Kingston’s history. Details about hours are on the Murney Tower’s website.